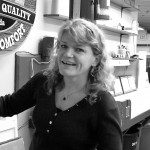 Susan Norman – Owner
Susan joined Peninsula Signs Ltd. in September of 2013, bringing with her over 20 years of design and sign experience. On top of overseeing design and production, it wasn’t long before she was handling most of the business in the front office. In March of 2014, Susan became a shareholder in Peninsula Signs Ltd., and quickly stepped into the role of Manager. She’s ready to help you with information and solutions to any project you have in mind! Give her a call at 250-656-9626. 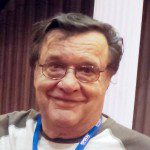 He grew up by Shoal Harbour, now a bustling waterfront home to Van Isle Marina and  Philbrooks Boatyard. From an early age, Bruce had artistic talent and always excelled at more creative pursuits than academic at school. “I liked art in school better than algebra because it was easier,” he says. By the time he was a teenager, local fishermen learned of Bruce’s talent, and at 15 years of age Bruce was painting names on boats for pocket money.

He apprenticed in Signpainting at what was then BC Vocational School, now BCIT, in Burnaby during 1960 to 1961 school year at the age of 20. There were 20 kids in the class, and they were promised job placement once they finished the program. That didn’t happen, there were no jobs! Bruce returned home and drove up and down the island, trying to find a sign shop to take on a young apprentice to no avail. Times were hard, and he eventually had to take on other work.

Not to be dissuaded, Bruce travelled to Montreal, where his brother was living. There he walked the streets and scoured the phone book for 3 weeks, trying to find work in the sign trade. He lived in a rooming house which cost him $55 per month, with shared kitchen and bathroom facilities. These types of lodging were referred to as “Hollywood Suites”.

A shop called The Sign Center took a chance on young Bruce, and he finally got a job for $1.00 per hour after pestering them three or four times. The shop was just starting out and had two partners – a paper banner specialist and a business man. They brought Bruce in as general help. As soon as Bruce got a brush in his hand, they exclaimed “oh! You CAN paint!”

At The Sign Center, Bruce learned the art of screenprinting – formerly the standard way to produce signs of a single layout in volume. One memorable job was 1000 Certificate cards with 10 colours!

At such a low wage, working long hours was the only way to survive. He often worked 6 days a week, 10 to 12 hours a day. Bruce stayed for 5 years at The Sign Center as it grew, except during Expo ’67 when he worked at the German Pavilion. He remembers the almost chaotic busyness of the World’s Fair. He’d set up a ladder to paint some lettering, go back to the bench to get the paint, and when he returned, the ladder would be gone! Either someone needed it, or was simply tidying up. He also remembered real armed guards at the Cuban pavilion, due to the Missile Crisis.

In Montreal, he met his wife. Five months later, they married, and a few weeks after that they moved back to Sidney. His first job was at Pacific Neon, where he learned gold leaf. Charlie Howorth took care of silkscreeening and showcards. Cliff Vickery specialized in neon signs and plastic backlit, Ralf Master took care of commercial work. Ralph soon opened his own shop – Master Signs -and eventually sold it to Bruce and a partner Roy Blackmore, another amazing showcard artist. They were partners for 5 years, until Roy bought Bruce out. Bruce opened Peninsula Signs in 1980, and the day he opened people and workers from the Town of Sidney came in saying how glad they were that there was finally a sign shop in Sidney.

There are few companies on the Saanich Peninsula, that haven’t had or still have one of Bruce’s well designed building signs. From Sidney to Montreal and back again, his experience, knowledge, skill and good nature is unmatched in this industry.

Check out our work!

Replicating a hand painted style. We love this sty

Keep an eye out for these babies, and help fill th

PERFECT stripe... our guys got skills!

Our favourite type of sign, masked and ready to Bl

We only work Saturdays for our Very Best Customers

All boat names we do are Special Order!

It IS a Good Life!

It IS a good life!

Forecast: Frost! Inside and Out

CHECK OUT OUR WORK!